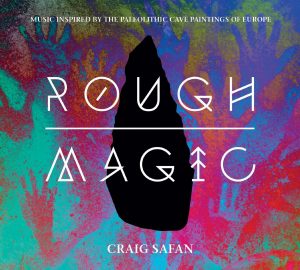 Craig Safan’s first “non-filmscore” release.   Music based on his impressions of the cave paintings of Paleolithic Europe.  Here are Safan’s liner notes:

I’ve been fascinated by mythology since I was six years old.  I can remember sitting for hours in the school library looking through books of Greek Myths, entranced.  Summers spent in Laredo, Texas turned into extensive fossil hunting expeditions, chipping rock-hard shells out of the ancient sea bed surrounding the Rio Grande . This led to rock collections, shell collections, and a love of all things old and, in my mind, filled with magic. By the time I was in college I was reading Joseph Campbell and was further drawn into the world of ancient people and how they thought.  I was especially taken by the amazing drawings and paintings of early humans and started visiting Paleolithic cave sites in 1979.  I have never stopped reading about and being fascinated by this sacred art.

For many years I have wanted to take my love of Paleolithic art and ancient myth and translate it into a musical form.   ROUGH MAGIC is the final outcome.

Being a pictorial composer I tend to see music in visual terms… what used to be called “programmatic music”.  Each piece in ROUGH MAGIC is based on a specific scenario and in that way the work is somewhat like a ballet built on thirteen scenes.  The titles allude to these stories but not in an overly detailed a way, leaving much to the listener’s imagination.

I visited many Paleolithic cave sites in France and Spain in preparation of writing this piece.  I traveled with a digital recorder and captured many ambient sounds in the caves.  In fact all the reverbs used were modeled using the echoes I recorded in specific caves.  Voices, footsteps, breaths, rocks, handclaps, whistles, and even stalactites being struck; all were turned into the various instruments I used performing the music.

This piece is in not meant to sound as music did 25,000 year ago.  There’s really no way to know what music sounded like back then.  We know something about the instruments used by early humans, but only about the ones that have survived, mainly bone whistles and flutes (which are reproduced in several of the tracks).  Anything made of wood has disintegrated long ago. Primitive instruments seen in various tribal societies around the world today usually include drums, logs, rocks, sticks, rattles made of seeds, gourds, and insect larva, hand claps, bullroarers, bone whistles, jawbones, and lots of vocal sounds, foot stomps, and chanting.  We also find that many of these instruments were only used by the shamans who would use the sounds as a means to go into a trance and travel to the spirit world.  I tried to incorporate all of this and more into my music.

I hope ROUGH MAGIC is as evocative of a timeless, ancient place and its magic for you as it has been for me.