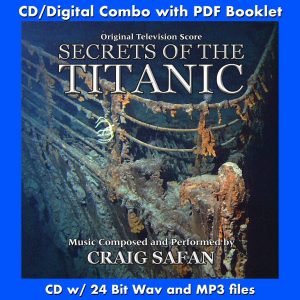 Dragon’s Domain Records, to be distributed through buysoundtrax.com, will be releasing SECRETS OF THE TITANIC, featuring music composed by Craig Safan (THE LAST STARFIGHTER, SON OF THE MORNING STAR) for the 1986 documentary produced by Dennis B. Kane, Nicholas Noxon and Teresa Koenig spotlighting the efforts of Dr. Robert D. Ballard and his team to explore the recently discovered remains of the Titanic in 1985, featuring narration by Martin Sheen.

Dragon’s Domain Records presents the world premiere recording of the score to SECRETS OF THE TITANIC, featuring music composed by Craig Safan, and mastered by James Nelson of Digital Outland. The booklet contains liner notes written by noted author Randall D. Larson and includes comments from the composer.